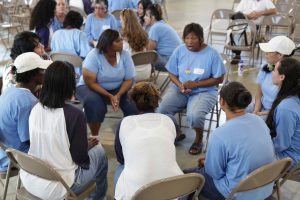 (Peace Circle at the California Chowchilla Prison for Women)

Things go wrong in prison. That’s a given.

The wrongdoing ranges from the minor (tobacco contraband, for example) to the most serious (such as rape and murder). Prisons are overcrowded, hot, and volatile places, where intimidation and violence are the norm.

For egregious violations, prison officials will refer to ‘outside’ criminal justice investigation and prosecution. Most rule violations, however, are handled internally, following established Corrections policies and processes. These processes typically mirror traditional criminal justice processes including the establishment of facts and guilt; the imposition of sanctions or punishments; and established processes for inmate legal representation and the right to appeal. Prisons even have their own form of a prison within a prison: segregation.

With this post, I explore how a restorative prison could respond to wrongdoing.

As I explored in my previous post, a restorative prison would start on the most basic level: building an intentional community with a foundation of mutually-held values and a guiding ‘social contract’. The social contract would establish both high regard and high expectations for all members (residents and staff) of the community.

What to do, then, when a member of the prison community violates the shared values or social contract?

Restorative justice offers clear guidelines on this question. With a restorative approach, the prison community would focus on the harm caused as opposed to the rule broken. In this framework, the prison community would bring together the person who caused the harm and those impacted by his/her actions. These restorative conversations would replace the current adversarial process and would place responsibility in the hands of those most directly involved. As a result of the process, the responsible person would understand the impacts of their actions on the community; and make meaningful amends to right the wrong.

The process would need to be facilitated, ideally by teams of trained staff and residents. The facilitators’ primary responsibility would be to support the conversation and ensure that the process is safe and upholds restorative principles. As such, the facilitators would ‘hold the restorative space’ for dialogue and accountability rather than determine the outcome.

A values-based prison community would also facilitate a restorative response to more serious incidents of harm. Specifically, individuals who are removed from the community (segregation) would be reintegrated as soon as safety can be assured; and would then participate in an intentional restorative reintegration process. The process would both create an opportunity for the person who committed the act to learn from the incident; and simultaneously address the needs of the people whom he/she affected. These restorative processes would require greater facilitation skills, which again ideally would be provided by teams of staff and residents.

A truly restorative prison also requires that we are equally attentive to the needs of victims and affected parties. When a person is first incarcerated, this responsibility should largely fall to the community. Parallel Justice offers a promising model for mobilizing community resources to meet both the immediate and evolving needs of victims.

When the time is right (an important but not always clear consideration), the person who committed the harm should be asked to take responsibility for the impact. These restorative processes would be held with, or without, the victims present, who have the right to determine their level of participation. Facilitation of these processes require considerable skill and care and probably should be done by neutral facilitators who are not directly connected to the prison community. The goals of these restorative processes would be for the responsible party to understand the impact of his/her actions, take meaningful responsibility, explore learning, and make either direct or indirect amends.

Beyond response to wrongdoing, a restorative prison will reflect restorative principles from intake to release. If prison it to become something other than simply a tool for harsh punishment, prison administrators would need to review their processes and protocols from a restorative lens. Possible areas for inquiry, include:

This clearly is a radical departure from our current prison system and it will not be easy to implement. There will undoubtedly be pushback. Some staff and residents may refuse to embrace the new vision or uphold the social contract. There may be accusations of ‘coddling offenders’ or ‘betrayal of victims’. Corrections should prepare for these eventualities; a restorative prison will take leadership, courage in vision, and a careful plan for implementation.

In a future post, I will explore some potential hurdles to implementation including:

Want to weigh in on these questions? Leave a comment or send me a note.