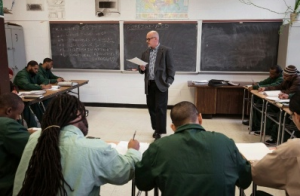 The first two employment posts focused on how to improve outcomes for reintegrating people once they were in the community. For this post, I’d like to focus on what should be happening on the inside. This is a graphic story… 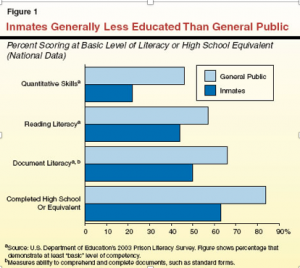 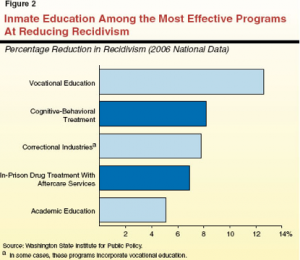 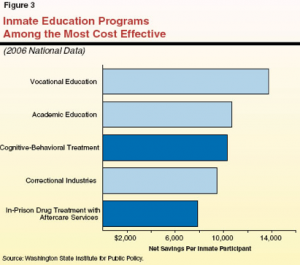 These graphs, excerpted from a 2008 Report to the California Legislature, largely speak for themselves. In a nutshell, inmates are under-educated and do better upon release if they receive educational programming while in prison (particularly vocational education). Put another way, prison educational programs can potentially save lots of money (and lower crime and new victimization in our communities).

The 2008 Report then goes on to make a series of recommendations to first improve, and then expand, California’s prison education programs. Not surprising the recommendations include a lot of the ‘usual suspects’:

The story, however, doesn’t end there.

In 2015, California nearly doubled the amount of programming offered in the facilities. This also came at a time of significant reductions in the state’s prison population (nearly 30% below the high in 2007; largely due to sentencing and supervision changes).  The goal with this increased funding was to address recommendation #3 and #4 (above).

In 2017, the California Report on facility programming. The Report, which studied utilization and effectiveness, issued a series of recommendations which were…nearly identical to the recommendations from the 2009 Report.

Ten years on–with more resources and fewer inmates–California corrections is still trying to get its educational programming right. Which serves as a segue to my next post: “We know what we should be doing but we’re not doing it…why?”