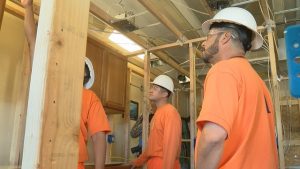 When I first started working in the niche known as community reentry, there was a widely-used refrain for two key pillars of successful reentry: a job and a place to live. This does not need a lot of explanation. Simply put, research shows that people reintegrating the community from prison do better when they have employment and a safe place to live.

I have come to believe that there are other critical legs to the ‘reintegration chair.’ For this series of posts, however, I want to focus on that first pillar of successful reentry: employment.

The idea for this series came from an unlikely place. I recently read a New Yorker article on the coming wave of automation of our economy. Although the article–Welcoming Our New Robot Overlords–made no specific connection to community reintegration, the larger question of employment displacement raised questions that I had not previously considered. These include:

And this, of course, sent me off searching for information…

My first realization was that it is hard to find good information about the employment of reintegrating individuals. Despite numerous variations of Google searches, I was unable to find a definitive study on which professions or industries are most likely to hire people with criminal records.

This is an old problem. Ten years prior, as the Director of a reintegration program, I was forced to rely on spotty anecdotal evidence, word of mouth, and cold calls, to point my clients in the direction of a possible job. At the time, we partnered with the State’s regional employment agencies, which also relied on the same anecdotes, stories, and directions.

The lack of accurate employment data reflects a serious gap in our knowledge base, particularly if we want to prepare for the coming wave of automation. The current boon in employment has created opportunities that only recently were unavailable to people with criminal records. The last hired, however, are often the first to be let go.

Employment clearly improves the likelihood of a person’s reintegration success. The Justice Center (Council of State Governments) has published an extensive White Paper on the benefits of integrated and targeted employment-readiness and job-placement services. Among their findings:

This sounds like common sense. The Justice Center, however, goes on to indicate that employment is not a panacea for recidivistic tendencies:

“It is important to note that although employment clearly plays an important role in reentry, research does not support the proposition that simply placing an individual in a job is a silver bullet for reducing criminal behaviors. What various studies do suggest is that to reduce criminal behaviors and recidivism, corrections professionals and employment service providers must address individuals’ antisocial attitudes and beliefs associated with crime, many of which also impact an individual’s ability to succeed in the workplace.”

Father Gregory Boyle of Homeboy Industries perhaps framed this best. Reflecting on his more than 20-years of employment-training work with gang-involved youth and reintegrating people, he said: “An employed [person] may or may not re-offend… Healing is the thing that really guarantees somebody won’t go back to prison.”